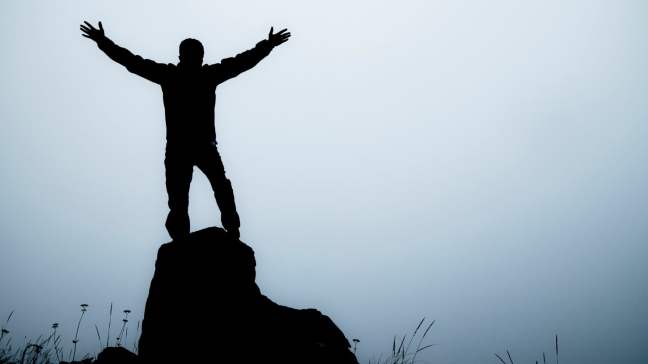 Unfortunately, some people think that if they earn enough money, they will be able to protect themselves from all ills, to have real security. But such a hope is vain. Paradoxical as it may seem, this is one of the most common reasons why people who live in such a hope also live in constant fear. Fear of losing money, fear of collapse, fear of losing health, etc. At the head of all the fears of such a person is the fear of dying. A person whose primary goal in life is making money and the acquisition of earthly goods, even if unconsciously, will see the meaning of his life in the things and wealth that he has here on earth. After all, as Jesus said, where a man’s wealth is, there will his heart be also (Matthew 6:21).

Death becomes a great threat to a man whose hope is based only on the material wealth that he has managed to acquire here on earth. Because he understands that with the coming of death it all comes to an end, the end of everything and the loss of everything that the whole of his life was spent for! The inevitable finale is coming when, as Job said, ‘He shall be rooted out of his tent wherein he trusteth; and he shall be brought to the king of terrors.’ (Job 18:14). For such a person, death, «The King of Terrors,» is a terrible and inevitable force that at any moment can deprive him of the opportunity to enjoy his wealth and everything that he has spent his life on for many years.

Money will not provide real security

The accumulation of wealth, money here on earth, will never give a person real security. Jesus warned about this:

‘Lay not up for yourselves treasures upon the earth, where moth and rust doth consume, and where thieves break through and steal… ‘ (Matthew 6:19). He taught people not to waste their lives on greed and the search for wealth here on earth.

The Lord showed people where they can reliably invest their lives: ‘but lay up for yourselves treasures in heaven, where neither moth nor rust doth consume, and where thieves do not break through nor steal… ‘

Do such things by which you can save yourself real spiritual wealth, things that will matter in this life, and in the next. All that we do to influence the eternal destiny of people will have significance both on earth and in heaven, even after our death!

Death cannot stop the significance of the life of one who devotes himself to the fulfillment of his true calling, which God expects from him.

That’s why the apostle Paul was not afraid to die, even when his life was under serious threat. When he had a premonition that his life could come to an end at any moment, he wrote:

He did not at all see in his death the end of the opportunity to live and accumulate wealth. He also did not perceive the finale of his earthly life as a loss of opportunity to enjoy his wealth, as a loss of ability to realize any plans he had for the future. He talked about his perhaps soon death as a gain. For him, death is the time of receiving a reward for the things for which he lived, time for a joyful encounter with Him whom He loved and for Whom he lived. For him, death meant the acquisition of the wealth that he had accumulated in heaven, while living here on earth! He was waiting for his departure from this life with anticipation of the impending award ceremony for all his works.

‘For I am already being poured out like a drink offering, and the time for my departure is near. I have fought the good fight, I have finished the race, I have kept the faith. Now there is in store for me the crown of righteousness, which the Lord, the righteous Judge, will award to me on that day—and not only to me, but also to all who have longed for his appearing.’ (2 Timothy 4:6-8)

Paul was not afraid to die because his life was given to God long before, and not to the pursuit of material goods. He wrote about his death with such ease, like a person thinking about whether to go on vacation or not.

‘If I am to go on living in the body, this will mean fruitful labor for me. Yet what shall I choose? I do not know! I am torn between the two: I desire to depart and be with Christ, which is better by far; but it is more necessary for you that I remain in the body.  Convinced of this, I know that I will remain, and I will continue with all of you for your progress and joy in the faith, so that through my being with you again your boasting in Christ Jesus will abound on account of me.’  (Philippians 1:22-26)

Every time I read these words of Paul, I think and mentally pray: «God, help me live so that I always have such courage to reflect on my retirement from this life!» Let that be your prayer…

Beloved, if you are blessed by reading this and other publications on this blog, share it on social networks. This way, you will inspire others and help to spread the Truth of God’s Word and Christian values among a larger number of people! Together we will fulfill the Great Commission of Jesus Christ! You can also subscribe to the blog (in the bottom right corner of the screen, enter your email address and click «subscribe») to be regularly apprised of new publications!!
Be blessed!